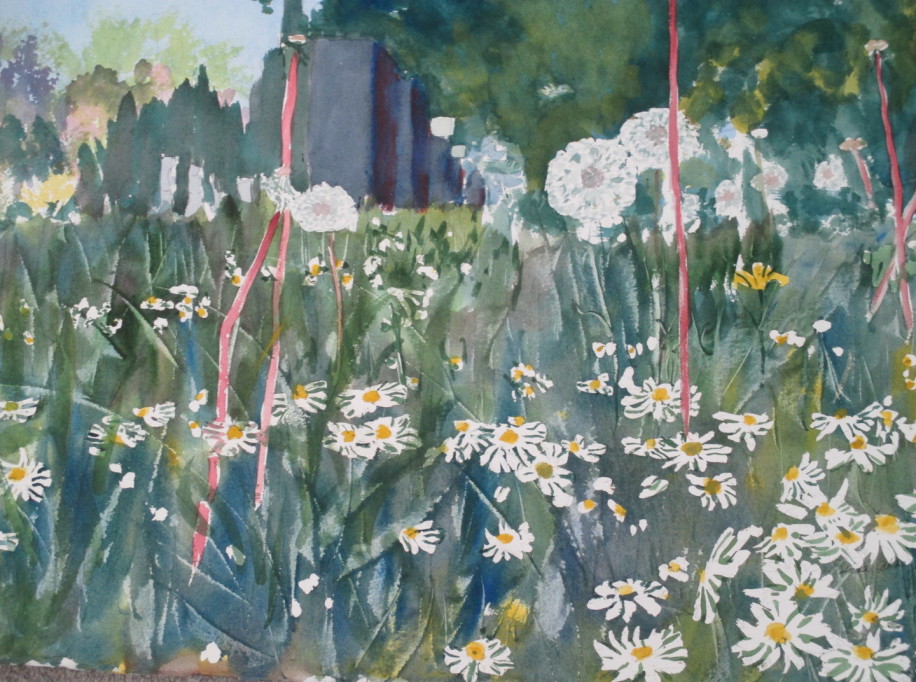 I paint to remember – how the light is at a certain time on a certain day, whether the shadows are hard on not, how soft the colors are. I try to capture what I am seeing and feeling, and hope the viewer can as well.
I like to paint watercolors with a big brush, using the accidents, transparency and freshness of the watercolor medium itself.

I was born in Syracuse, NY, moved around a lot, and at age ten moved to and attended schools in Urbana, IL and graduated from Hanover College, IN, in 1966. While at Hanover, I attended the University of Neuchatel in Switzerland my junior year. Following graduation, I served as a Peace Corps Volunteer in Bizerte, Tunisia from 1966-1968, teaching English in the College Moyen de Jeunes Files and the College Technique de Garcons.

After returning to the US I taught fourth grade in Princeton NJ and Title I reading and math in Charlottesville, VA. While teaching I completed an Associate Arts Degree in Art at Piedmont Virginia Community College.

When I moved back to Syracuse in 1990, I began painting and exhibiting full time. I taught drawing and watercolor to elementary students in a city school and adult students privately in a nearby church or museum.

In 2002 I was able to spend six months in Florence, Italy, studying Italian and oil painting with the Syracuse University Programs Abroad center. I spent two years again in Florence, 2008-2010, studying Italian and oil painting and teaching drawing and watercolor painting. After each session of my watercolor classes, my students have had a show of their work and a party. See my website, classes, at www.LindaAbbey.com.

In 2016 I moved back to Charlottesville. I painted a series of the downtown mall in 2017. Presently I am working on techniques and ways to add more sparkle to my paintings.

-Golden Rule from JC Penny and McKinley Brighton School, 1997 Chancellor’s house booklet received a bronze medal from the Council for

-Advancement and Support of Education, 2001
-Awarded a grant from John DeFrancisco Art and Cultural Program, 2003

-“Magazine 13” a local Syracuse television program, featured my watercolors of

Onondaga Park, 1999
-“Trees for Onondaga Park” – 12 prints of my watercolors in a plexi frame raised

monies to replace trees damaged by a storm, 1998
-Commissioned by Syracuse University for six paintings for commemorative

coasters (and chocolate bars!) for awards to selected SU alumni, 2000

Own Time” art competition, 2000
-I was commissioned by the SU Chancellor’s wife for a painting of their home for

the cover of a booklet celebrating the home’s 100th anniversary, 2000

which I gave to friends and family.